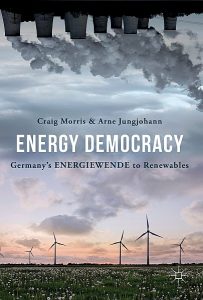 Welcome to the first in a series of interviews with leading players, commentators and analysts in the clean energy sector. Where better to start, we thought, than the Energiewende. It was certainly the inspiration for my first foray into clean energy back in 2007. The story though of course is much older. Here is our short interview with Arne Jungjohann, author, energy analyst and energiewende expert. Together with Craig Morris (IASS) he co-authored Energy Democracy – Germany’s Energiewende to Renewables. Further details, or to order at www.EnergiewendeBook.de

Having recently taken your book on tour, in your opinion, how do you see the differences between the German Energiewende and the energy transition elsewhere in Europe and the US?

The Energiewende gets a lot of attention. The assumption is: If an industrial powerhouse can power its factories, heat its homes and run its trains on renewables, then any country can. But that is only half of the story. What makes the Energiewende really unique is that citizens, not big utilities, are driving the transition. Germany may be the only country in the world where the switch to renewables is a switch to energy democracy.

Why do you feel the German mentality from the citizens, is so different towards renewable energy compared to other countries?

People all around the world favour going renewable, so that is not so different. The question is how the Germans convinced their government to pass laws that support community energy and hurt utility interest. In our research we found that Germany enjoys a comparably healthy state of democracy.

How has Germany’s democracy and its political system enabled Energiewende policies?

Things are far from perfect here. But in comparison to other countries, Germany’s proportional voting system and its federalism set strong incentives for our political parties to find a middle ground. After a change in government we don’t see radical policy changes. This has helped to establish a robust energy framework with long term targets which in return provides a high certainty for investors. In addition, a diverse media landscape and keeping money out of politics have allowed to hold the influence of lobby interests to a reasonable level.

Your book includes a couple of stories on how rural, even conservative communities fought against new nuclear power plants in the 1970s and 1980s…

Yes, and those protests predate concerns about radioactivity or climate change. Many Germans in that generation were particular critical towards authorities – their parents, the state, the utilities. This is probably an inheritance of Germany’s dark Nazi past. So in the 1970s, citizens wouldn’t accept when the state tried to build nuclear power plants all over Germany. They started saying no and demanded a say in these decisions. They fought for the right to produce their own power. The Energiewende started as a movement for more democracy.

Do you think the rise of populist parties across Europe and the US could be a factor in stalling or impacting the global transition to renewable energy? Where do you see the windows of opportunities in the current political climate for the Energiewende?

Rising populism is deeply concerning. It shows too many people, especially in rural areas, feel left behind while elites and corporations are making the calls. Of course energy policy alone will not solve these problems. But in the Energiewende, citizens are empowered to join forces and build a cleaner future themselves. They see that they can make a difference. Citizen energy is the antidote to the politics of fear by the populists. An active role for citizens in the energy transition helps revitalizing our communities and strengthening our democracy.

The majority of our clients are German, one in particular, Sonnen, recently started their Sonnen Community which I’m sure you have heard about – is that a good representation of your idea of energy democracy?

Sonnen Community helps empowering people to produce and share energy on a large scale and thus bringing individuals together in a virtual community. It makes it easy for people to join. This is crucial to make the transition to a renewables-based economy work. So yes, companies like Sonnen are important enablers of energy democracy.

If there is a German mentality towards green energy and self-consumption, why is Germany not amongst the leading countries with the uptake of EVs?

Germany is a laggard in electric mobility, because of the cozy relationship between the government and the industry. Our carmakers have focused for too long on the combustion engine. While citizens pressed hard for energy democracy in the power sector, no one demanded a “citizen car”. Why not? Because the citizen technology for modern mobility is not a better car, but walkable cities, wider bike-paths, convenient buses, and faster trains. German carmakers have to catch up to international competitors. Utilities should be a warning to carmakers, as selling units of a certain product only– here kilowatt hours of electricity, there electric cars – will not be enough. They will have to change their business model and turn into a mobility service provider to survive in the long run.

Finally, what is your take-away from the Energiewende for other countries?

The latest data by various energy analysts point towards the same conclusion: the global transition to renewables is already underway. At different speed in different markets, but there is no turning back. The question is how fast will we get there and who will own the technology – will this new energy world be dominated by large corporations or will have citizen a say? Every society has to answer this question for its own. The energy transition is a one-time opportunity to strengthen energy democracy.

We’re not on commission, but the book is a fascinating read if you’d like a detailed insight in the energiewende story. Next time we take a closer look at the rise and future of e-mobility.

David Hunt is Managing Partner of one of the leading global executive search firms in the clean energy sector. He is also Chair of the Decentralised Energy Forum and a policy board member of the UK Renewable Energy Association (REA) and the Energy Storage Alliance.