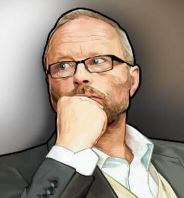 Perhaps not everyone will get the robot connection, but those who do or have watched ‘Red Dwarf’ will know Kryten (Robert Llewellyn) well. As will those who have watched ‘Scrapheap challenge’. But coming to clean energy and electric vehicles, Robert is the brains behind, and front man of YouTube channel Fully Charged. If you’re not a subscriber, I recommend you do. You can also follow Robert on the Twitters at @bobbyllew Robert brings some humour (Humor to my American followers), to our very serious subject! Here is our short interview…..

1.       Your Youtube channel, Fully Charged, has been around for over 5 years, and features both EV’s and renewable energy. When and how did you first become interested in renewables?

I first became interested in renewables in 1973. I spent some time in a proper ‘hippy commune’ in the black mountains in Wales. It was very rough, genuinely off grid, it had never been on. This large old farmhouse was home to some very flakey hippies but also some engineering students from Oxford, we botched together the most inefficient, clanking wind turbine that occasionally charged old truck batteries that ran 3 flickering lightbulbs. I then forgot all about it and accidentally ended up working in the TV industry, but I’ve always had an interest in engineering and technology. Scrapheap Challenge came out of that interest and for 10 years was my dream TV job. It was while working on Scrapheap, particularly in California that I became aware of the resurgence of electric cars. I was intrigued and slowly began to understand their significance. I met some amazing people there, particularly those involved in ‘Plug in America’ an electric car advocacy group. I became more interested on returning to the UK, this, combined with the opportunities opening up in online video led to the creation of ‘Carpool,’ the first series I produced and presented. Out of that grew Fully Charged. Since then it’s been almost impossible to keep up with the deluge of launches, new technologies and advances in the field of electric cars and renewables, storage and developments in grids, automation and smart systems linking all these elements together. I do my best.

2.       You have both an early Nissan Leaf, and a Tesla Model S, which makes you smile most and why?

I have to admit the Tesla makes me smile, but due to the cost of the lease it also leaves me feeling slightly foolish. My son described it as ‘dad’s late life crisis car’ which was very kind of him.

My single criticism of the car is it’s too big, I don’t need a big car and parking it, particularly in my garage, but It is an incredible machine, a computer and battery on wheels.

I have the standard 85, not as fast as the crazy fast versions but I wanted it for the range, not the acceleration. We have driven to Italy and Sweden in it, the longest run between charges, 265 miles in France.

The Nissan Leaf always makes me feel better when I drive it, which is almost every day. It’s now been such a cheap car to own, 6 years, 57,000 miles, never any problems, minimal servicing, around £500 spent charging it. I’ve had 2 punctures and replaced the rear wiper blade, and that’s about it. Oh yes, screen wash, I’ve spent loads on that.

3.       You spend a lot of time testing EV’s and researching energy storage and clean energy solutions, what has excited you most this year and why?

I think it’s batteries. It is clearly one of the dullest things to be excited about and very hard to make dramatic, exciting TV shows about. I mean, batteries, what do they do? You can’t see anything move, just a box with stuff in it. But when you think about what they could do, widely distributed, a battery in every house, the impact this could have on the way we produce and consume electricity, where we do that, who owns the source of that power, it is clearly game changing technology.

Batteries are also getting cheaper, and they’re getting cheaper faster than many people predicted. the $100 per kWh battery is on the horizon, if and when we reach that price point it’s goodbye internal combustion.

That’s what keeps me interested in electric cars. It’s not so much the cars or the design, it’s the greater impact, the fact that these technologies are ‘fuel agnostic.’ They are not affected by where the power comes from, an electric car works just as well using the dirtiest and the cleanest electricity, and you can make that power yourself. The point is they CAN use the cleanest form of fuel the human race has ever created, renewables.

I have a mere 2.4 kWp of solar panels and I’ve driven well over 20,000 miles in the Nissan Leaf using sunlight. Yes it’s mainly in the summer, yes I can’t charge with solar at night, but that fact still makes my jaw drop. 20,000 miles without drilling, transporting, refining and eventually burning. That was utterly inconceivable in my youth.

4.       Your Fully Charged Christmas Special gave a great review of 2016, and some insight into what is to come, but what is your biggest energy related hope for 2017?

Simple economics. It’s all about ‘clean and cheap.’ That is a phrase I’ve been hearing more and more. From engineers working in the electric automotive sector, national grid managers, battery storage experts. They are all keen to design systems that allow them to use electricity that’s ‘clean and cheap.’ When I enquired further they explained that the two things are going together more and more. Renewables are not just clean, they are now also cheap, and getting cheaper. There will be setbacks, the current UK and US governments will fight back with vigour and genuinely damaging power. They are supported and strongly influenced by the more aggressive elements in the fossil extraction industry. This industry is under direct threat from renewables and I predict the fight will be long, dirty and damaging. However, as technologies like solar and wind get cheaper, the power of the dollar/pound will override their entirely ideological desire to keep drilling, mining and burning. Coal is no longer cheap, it’s dirty and expensive, gas is a short term stop gap, and also very prone to price fluctuations. The more renewables installed, and they are being installed globally at dizzying speed, the cheaper they get. The longer they are installed, the cheaper they get.

Anything that doesn’t need a constant supply of fuel that needs extracting, refining, transporting and burning is going to be cheaper.

5.       At a recent event you mentioned you have been recording a documentary for the BBC on clean energy, can you tell us when then will air, and a little more about it?

This has been a very long project, we’ve been filming it off and on for the past 3 years. The BBC has commissioned 3 full length (90 minute) documentaries for a series titled ‘Bottlenecks.” The one I’ve been working on is about the future of energy and is currently titled ‘Village to Vegas.’

It focusses on mine and my neighbours attempts to install community owned renewables and storage in a picturesque Cotswold village where I have lived for the past 25 years. The Vegas part of the title refers to the fact that I visited las Vegas last year to see what they’re doing, essentially the same thing but on a much, much bigger scale. Just before Christmas the City of Las Vegas, (not to be confused with the greater Vegas conurbation) became 100% powered by renewables.

6.       How does it feel to be a ‘poster boy’, and hero alongside Leonardo DiCaprio, for the clean energy fraternity?

That is a terrifying suggestion and one I haven’t heard before. I think Leo is likely to make a bigger impact and I think it’s great he’s doing it. There are obvious dangers and drawbacks for any movement or political party to try and get ‘celebrities’ to endorse their ideas, we saw that big time with the Brexit and Trump votes, but I think Mr DiCaprio is in a slightly different league. The only way I can answer ‘how does it make you feel’ is ‘it makes me feel nervous.’

7.       Finally, what are the future plans for Fully Charged? It would be great to see this picked up by BBC or Sky as a mainstream show.

Future plans for Fully Charged are to continue to grow the channel, expand the ‘in front of camera’ talent, make more episodes each week, launch some ‘live events’ around the country, make bigger sponsored shows which involve more people etc.

As for trying to get it on mainstream, or possibly old fashioned TV, I’m not pursuing this at the moment. I’d never say never but currently Fully Charged can be seen all over the world, (about 45% of views are from outside the UK) and I have full control over what we do.

I have the advantage of long experience of working in the traditional TV industry and I really understand the pros and cons. At the moment, the way Fully Charged is growing and developing, it’s far too interesting an experiment to give it over to a big broadcaster.

It also has rapidly growing interest from companies we’ve covered in the past. They have reported significant and long term interest in their products after the episode featuring them has gone out. Over the years we’ve tried numerous methods of funding the series, British Gas being an early sponsor, more recently Ecotricity and Bosch have helped us to keep going. Since we launched the Patreon campaign last year we have a modest but workable base budget which is now being topped up with what are effectively ‘sponsored episodes.’ This is a very delicate arrangement and has to be done with sensitivity to maintain the standing of the brand, but if we are 100% transparent about how the episode was funded, it seems to be working rather well. We have numerous shows funded this way already on the list for 2017, so all in all it’s looking very positive to remain online. The shows are also on Facebook and soon to be on Amazon Prime so our audience is growing organically.

Thanks to Robert for his time. Please do subscribe and share to Fully Charged, he maks our sometimes dry subject highly entertaining, and more accessible to those who aren’t involved in the clean energy sector, preaching to the not yet converted.

Oh and don’t forget, Hyperion Executive Search is a talent acquisition company exclusively in the clean energy sector. Need some key talent, we can help.