When faced with daily doses of tragedy – volcanoes, heat waves, wildfires, school shootings, corrupt international political networks, and the consequences of extremism – it is too easy to ignore the longer-term good news. For one, long-term trends are not as bad as they seem.  For another, a new generation of leaders gives reason for hope. Generations Y and Z are spawning torch-bearers with compassion and conviction, driven by purpose, facts, and optimism.

“Optimistic people play a disproportionate role in shaping our lives. Their decisions make a difference; they are inventors, entrepreneurs, political and military leaders – not average people. They got to where they are by seeking challenges and taking risks.”

As any politician can tell you, fear has – historically – bred followers; whether it be the fear of god, guns, or even great arguments, it’s built empires and institutions.  Where arguments are at the centre, fearmongers frame a worldview – narrowly or widely, toward the past, or the future.

Across the world, we are seeing such fearmongering, self-serving politicians frame a (pessimistic) world in which times have been better, that it’s necessary to steer our countries back to a gilded age – an age without globalisation, regulations, progressive social programs or even diversity. Their memory of past glory is clearly selective, their worldview has turned cynical, and their grasp on facts often murky.

On the other side, there are facts. 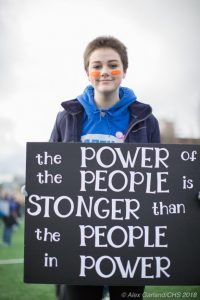 “Everyone is entitled to his own opinion, but not his own facts.”
Daniel Patrick Moynihan

Global literacy rates and life expectancies have never been higher, epidemics are rare (and becoming predictable), deaths by terrorism statistically a non-issue, and hunger and extreme poverty are – more or less – on a steady decline. Bill Gates is so convinced that “Things are better than you think”, that he is distributing the book, Factfulness, to every graduate of US colleges.  “The world would be better if literally millions of people read the book,” he said.

That’s not to say there aren’t problems. The consequences of climate change are among the most daunting risks we face as a society.  But we can take pride, take confidence, and especially take hope in some of the next generation of leaders. They are unreasonable but principled. They are idealistic, yet fact-driven. They are angry, yet organised. They call B.S. when they see it and don’t back down. Most of all, countless studies show them to be optimistic – which we know to be contagious.

“We are on the verge of something amazing. We’re going to change history.”

When cynics look outside at night, they see only the dark, whereas our enlightened young leaders can see the stars. When cynics peddle lies and climate change misinformation, the young take action, based on truths they accept. Our young leaders understand that human-caused #climatechange is a fact – even undisputed by the greatest contributors to it.  They recognise the immense damage it will cause, and are addressing it.

Consider Zero Hour – a coalition of confident, environmentally-minded, teen-aged activists who proclaim: “We are the ones we have been waiting for”. Their contagious energy is based on mounds of conviction, and their conviction is built on mountains of facts. Just as you would expect from the best leaders.

Consider 24 year old Boyan Slat, passionate scuba diver and founder of the Ocean Cleanup, who has raised over 20 Million USD in order to “have 50% of the Great Pacific Garbage Patch cleaned up in the next 5 years.”

Consider the plaintiffs in Juliana v. the United States: a most impressive lawsuit brought on by 21 kids “on behalf of future generations”. Against all odds and the might of the Executive Branch, where cities have failed, these kids have framed a worldview in which “life, liberty, and the pursuit of happiness” includes “the right to a climate system capable of sustaining human life.” The trial has drawn the support of a Nobel-prize winning economist and the ire of the US President (what greater praise can one receive?)  More importantly, they are inspiring other youths – in Columbia, Belgium, and Norway. In the words of a 12-year old plaintiff: “We are optimistic and have the courage to keep standing up for our constitutional rights.”

Or consider Rose Strauss. She was called “young and naïve” by a Republican gubernatorial candidate just two years ago, but has now launched the Sunrise Movement, an “army of young people to stop climate change and create millions of good jobs in the process.”

“So, you could call me optimistic and hopeful and probably just a little bit naïve, but I’m coming from the space that the best way to predict the future is to get out there and just do it yourself.”
John Elkington, Godfather of Sustainability

Perhaps the oldest adage among recruiters and HR professionals, is to “hire for passion, and train for skills”. True, more than ever.  Skills get today’s job done. Passion questions the premise, finds better ways to do it, and opportunities for tomorrow.  These are essential qualities of a leader, and we are seeing it in the next generation of climate leaders.

Now, whether or not they are available for hire… that is another question. 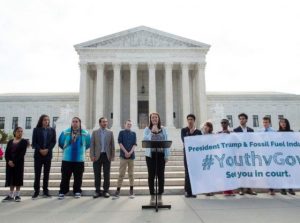 “Be the change you want to see in the world.”

For another example, consider the March for Our Lives – a youth-led initiative to educate Americans and enact change on the epidemic of American guns and gun-violence.  Who will ever forget the energy, conviction and raw passion exhibited by Emma González and other founders of the movement? #neveragain

This article is part of a series of opinion-pieces written by Lukas Neckermann for Hyperion Executive Search. Lukas has previously led the Corporate University of a Global Fortune 50 company. He is now a researcher, author and consultant on the mobility revolution. He is an advisor to Hyperion Executive Search, and also to NEXT Future Transportation, SPLYT, Flock, and Eliport.