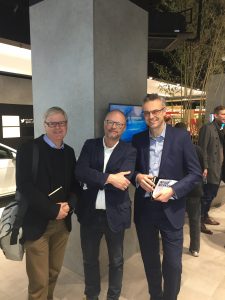 It was great to catch up with so many influencers, movers and shakers at yesterday’s Fully Charged event at the Milton Keynes ‘EV Experience Centre’. If you’re not familiar with Fully Charged, you should be, but you can find the YouTube Channel here. When you walk in and immediately bump into Roger Atkins and Lukas Neckermann, you know you’re at a true EV event, not to mention Robert Llewellyn of course, the presenter of Fully Charged, and long time Tesla and Leaf driver.

There was some disappointment though. Upon arrival I pulled up to an EV-Charge point, outside the shopping centre, but it was Chargemaster, and that isn’t one of the many RFID cards/apps I have signed up for! Interoperability eh!, Still needs sorting. That was the only downside though. Some beautiful snowy scenery on the way to the event, and some lovely bacon butties to close (Kindly supplied by Hyperion Executive Search), so lunch was on me!

I’ve been a follower of Fully Charged for some time, but it was interesting to hear from Robert Llewellyn, about its genesis and evolution, from dodgy one man hobby, to a superbly produced show with a number of employees. There have been over 300 shows to date, all about EV’s, solar, wind, energy storage, all kinds of good stuff, and plenty of irreverent abuse of Trump and UK government over their energy and climate change policies.

A good old friend, and fellow red, Dan Caesar, is now, in his spare time, leading the commercialisation (commercial overlord, apparently!) and expansion of the Fully Charged ‘brand’, including a flagship event, Fully Charged Live, to be held at Silverstone GP circuit next summer (9-10th June, 2018). if you are an OEM of EV’s, or operate in the supply chain, from EV-Charging to ride-hailing to well, anything EV or Emobility related, it looks like it will be a great event.

What else, I met the man who has his Tesla Model S, converted into an estate car, with Elon Musks blessing. Caught up with many from the EV-Charging fraternity, and colleague Thomas O’Neale got to have his first drive in an EV.

It was great to be a sponsor of the event, and to be involved in another strand of the push towards eMobility and clean energy. Since being bitten by the clean energy bug in 2007, setting up a solar installation business, to founding Hyperion in 2014, my entire focus has been on growing, promoting, and changing the energy sector. Hyperion’s sole purpose is to play our part in the energy transition, placing the very best people, with the very best companies, for the very best future of the energy transition. Much like many of you, and very much like the Fully Charged team, it’s a journey we’re all on, and passionate about.

Lack of Talent Holding Back your Growth? Book a Free Consultation