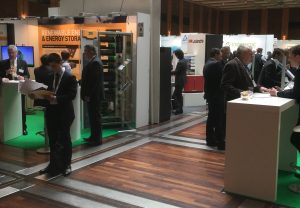 Hot on the heels of Ecobuild, a show in decline, it was off to Düsseldorf for Energy Storage Europe, a show very much on the up. I guess that shouldn’t be a surprise given the rapid growth of storage at all scales. Based alongside a three day conference, the exhibition itself was about 35% bigger this year. The only negative being there was only two coffee shops, and a poor food selection, unless you were a conference delegate. Not the end of the world.

It was a great opportunity to catch up with existing clients, and to make face to face introductions to established contacts from Germany, the US and Canada. One or two from the UK too, but it was far from ‘the usual faces’. The most obvious thing was the buzz about the place; it’s not a huge show, about 160 exhibitors, but it was busy, day two in particular. There was a good mix of technologies on show too, not just batteries, though they were the majority. Flow batteries, lithium-ion, ultra capacitors, and fuel cells all vied for attention, alongside some system integrators, EPC’s and smart energy software solutions.

From a personal point of view it was a hectic but very enjoyable three days. I love Germany and had the pleasure of an old solar contact showing me around his home town, concluding with gin cocktails overlooking the harbour (thanks again Davide). Of course I was there on business and some really positive meetings were had. It was good to meet contacts from LG Chem and SolarX in good humour, the partnership announced for the residential storage sector is going great guns. It’s clearly a genuine partnership both parties are benefitting from. Not surprisingly the UK residential sector was hot topic with a number of players I spoke to making plans to enter the market. Of course we’ve already assisted sonnen to make that journey.

For us there is significant interest in our services to be further expanded into mainland Europe and North America. Flattering to hear as we approach only our second birthday. Next the Clean Energy Summit beckons and then our attention turns to Munich and Intersolar/ESS. I’m really looking forward to getting around all the halls as both solar and storage are core markets for Hyperion.

Some poorly timed flights mean I’m writing this mid-air, when I should be watching Liverpool FC smashing Manchester United. Let’s hope for good news by the time I land. (A good result for sure).

Next week focus is back to checking how the team are doing delivering roles for LG Chem in Germany, sonnen in the US and UK, and RedT, among other more secretive assignments. There are some great jobs listed on our website, but not every assignment is advertised. If you have industry experience and want to explore future options, or you are looking to expand your reach, and your team, get in touch for a confidential conversation.