The view from Intersolar 2015

The view from Intersolar 2015 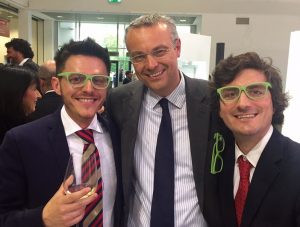 After a hard day

Where do I start? Of course the headline act this year was Hall B1, Energy Storage, or at least that was the area most talked about; but not necessarily the carpet most trodden! This is the first year of a dedicated energy storage hall, and I expect more next year.  Though perhaps with the developments in solar inverters and storage capability or compatibility it may make sense to share halls.  We all know that energy storage will be the great game changer, the enabler for renewables to become even more mainstream so it’s hardly surprising the level of interest and noise around the hall, and the sector.  Tesla of course have made some great leaps in bringing storage as a ‘now’ rather than future technology in people’s minds, if not yet fully in reality.  But certainly a PR path for others to follow, with many technologically superior, or so I hear. It’s exciting times, the Wild West again, like when I first got into solar in 2007, though hopefully without the cowboys this time! Innovative funding and cost reduction are critical for storage, but at least we have a guide path on both fronts from Solar PVs achievements in the last decade.

A fair few were talking about how much smaller the show was than in the past. Thank goodness in many ways, I think I lost a good amount of shoe leather in the three days. Maybe next year I’ll go for the trainers or borrow my sons scooter as more than one attendee sported.  Of course in the last few years there has been much consolidation in the sector, there wasn’t a great deal of solar thermal about which was once prominent I’m told, from a few years ago. Of course there are more shows globally of importance, so marketing budgets have to go around further, and many stands of big companies may be smaller as a result. Having said that a few of the biggest stands belonged to clients of Hyperion, clearly a link between success and our support!!

There was a fair amount of product development and product launches as you would expect, a rise in PERC based modules, fad or future, we’ll see. More CIGS, thin film on display than I expected, and even a PVT panel launch. Of course, plenty of new product offerings, higher efficiencies and capacities in the Inverter sector (including 99% efficiency from Sungrow), and the aforementioned storage capability.

There were further developments on MIP with SolarWorld leaving Solarpower (EPIA) for their changing stance towards support for MIP. More manufacturers removing themselves from the mechanism too, though at least one Chinese manufacturer I spoke to was happy to stay in, though would rather it didn’t exist clearly. It will be interesting to see what happens in or before December and potential renewal of the scheme.  With SolarWorld an increasingly isolated voice for MIP, will that have any sway at the EU?  Let’s hope common sense prevails. Yes I know, but I’m ever the optimist.

I think best of all the mood was a positive one, all the analysts predicting a solid global future, the UK leading the way in Europe again, and the vast opportunities for the sector (and its storage friends) both now and in coming years. When I started a solar installation business in 2007 almost everyone I knew thought I was mad, now everyone is mad keen to join the sector, what a difference 8 years has made. I wonder what the world will look like for us at Intersolar 2023?  See you there!